FILM – Mardin, Turkey, 2015. In a future where all is still to be built, between concrete and workers of a construction site, between Turkish and Kurdish, four young men read the story of an imaginary city : “in Heliopolis, two communities have gathered in response to the call of the Myth of climate disorders : the myth says that any life outside of the former abandoned City-state turned into shelter has become impossible. At first, life is organised in an organic dynamic, soon endangered by apathy where two archaic political systems resurface. A coup d’état is coming”. The text of Heliopolis – that I addressed to the people living in the area of Mardin as the consequence of political troubles I experienced there in 2014 – as much as the portrait of the four young men facing their own condition through the reading, are revealed by the film – and all the potential of relationships to be made between reality and fiction. 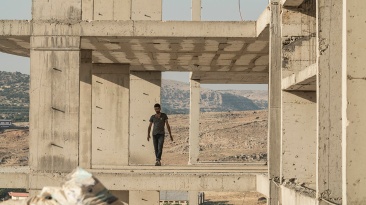